Apologies for the wait before posts.  I can quite honestly say that it is only now that I am beginning to feel human again.  We have viewings on Saturday, people are interested!  Terry and I had had a moment of transient panic having finished the property, that no-one would be interested.  Our fears are momentarily assuaged by 3 emails, one after the other, from the agents with viewing details.  There was also a request from a very rambunctuous man who demanded to see the house before the viewing day with a firm offer of 10k under the asking price – I think not!

Felicity, my aged BMW failed her MOT on rear brake cylinders, windscreen wipers and nearside seal requiring welding.  It took Terry an early morning jaunt to a scrap yard and just under £100 and an afternoons graft to get her repaired and she flew through the re-test <3.  Despite being an M reg I love my 3 series, 1.6i, 3 door Beamer.  She never lets me down.

We are tidying up itty bitty bits in the house, or rather Terry is.  My duties are to cook and for the moment I’m happy with that.  The dogs can sense that something is underfoot and they are clingy and irritating.  Maybe they feel the same need to get moving as we do.  It is so hard not to wish the time away.  Alex from Gradishte very kindly sent us some photos of the outside of our home in Bulgaria.  It was gratifying indeed to find out that our lovely neighbour Ilai has boarded up the gate to the property and that he makes daily inspections.  It is really sad to say that after 15 years in the same house here in the UK I have never had that kind of selfless help from any of our neighbours.  In fact we put out and bring in our neighbours bins every single week but have never had the favour returned or the kindness acknowledged.

I have had the first frost of the year reported faithfully by Linda, only a touch but it’s arrived.  I have noted it in my gardening head for future use.  I so want to get my planting correct next year.  So frost happened in Bulgaria before here in the SE of the UK.  Having said that Alex reported 25 degrees today.  It’s 18 degrees here but dark, rainy and muggy! 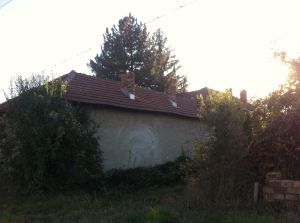 The north facing back of the house with it’s 5 chimneys, very Railway Childrenesque.  Who knows what has
made that circular mark on the wall though.  A ghost train perhaps! 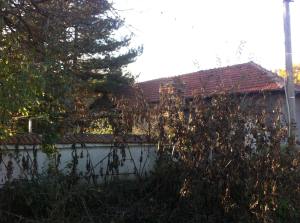 The road side of the property.  I use the term road flexibly because it’s actually a grassy lane

It’s good to see the corner repair to the roof is holding but the guttering needs replacing.  The down pipe seems to have disappeared 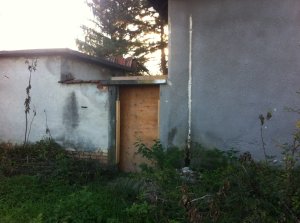 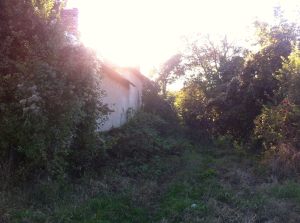 The grassy track behind the house.  The village is set up almost on a grid basis with each property belonging to a road that is sliced horizontally and vertically by 6 foot grassy tracks 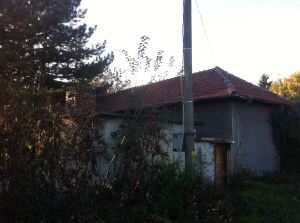 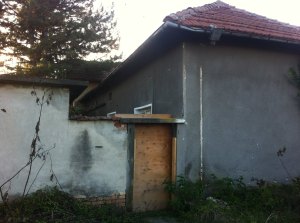 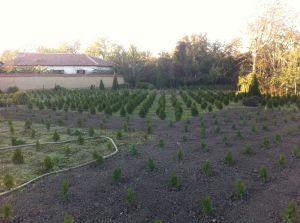 Alex’s neighbours garden.  He’s a market gardener but still it is good to see how fertile the ground is.  His house sits at the bottom of our road about 250 metres down.  Alex and the market gardeners plots sit on a little green area.

I have made contact with a couple of housing authorities in SE Wales and been given the information on leasing homes to them.  As long as the need for housing remains as it is there is every indication that they will be very happy to take all 3.  The criterion to be met are standard but the benefits of leasing many fold.  We are putting together a portfolio on properties we are interested in and marking the dates for house auctions.  That is the next step!