I wouldn’t be British if I didn’t mention the weather.  Checking the forecast has become an annoying tic.  The landscape is still white and in places there are collected snow piles of over 2 metres.  The village roads are getting better; if you enjoy navigating a 2.5 tonne killing machine across what can only be described as ice drifts.  If the car were white we’d be akin to a polar bear navigating the melting icescape.  The following images were taken from the seat of the Landy whilst driving to the mill in Alekovo.  The  roads are scraped but the snow piled alongside the road. 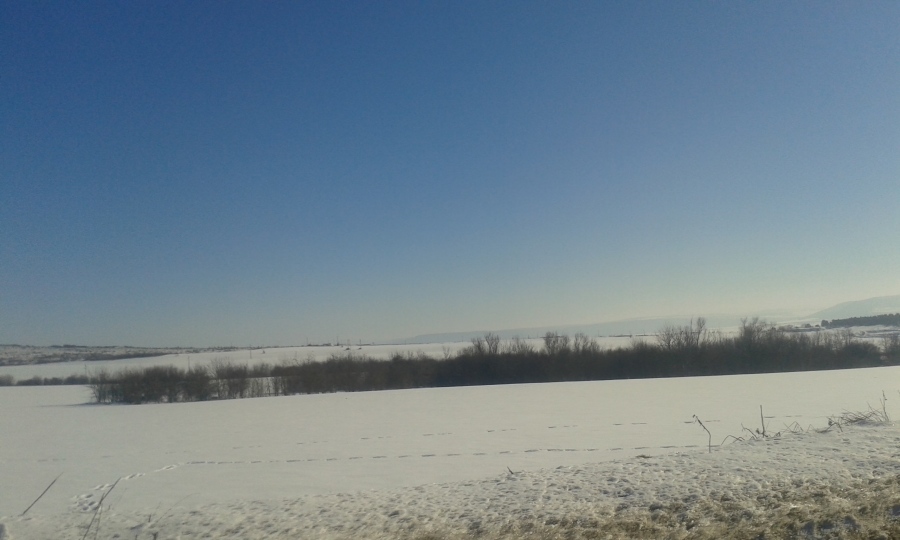 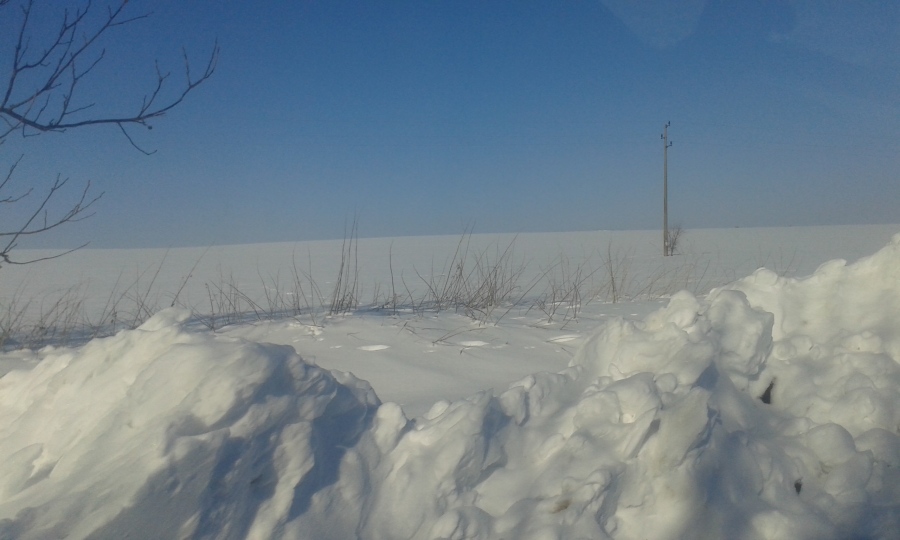 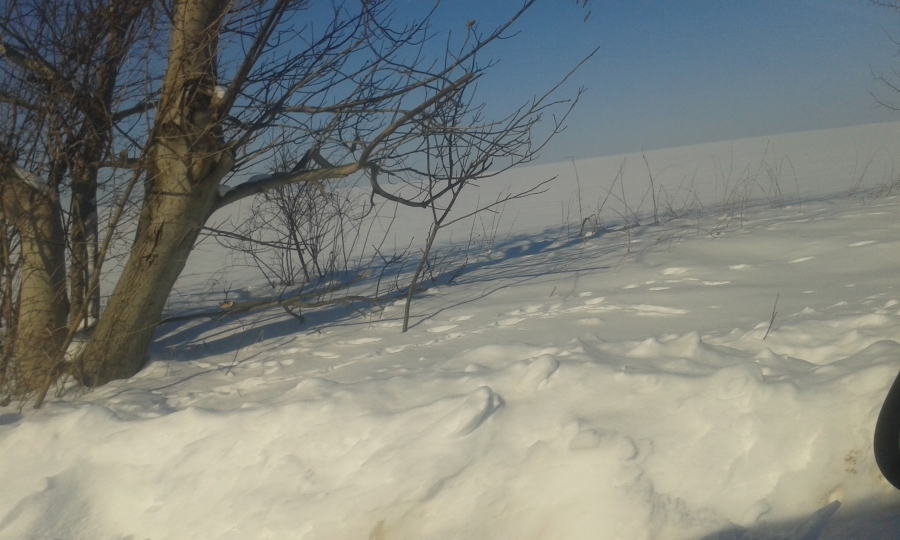 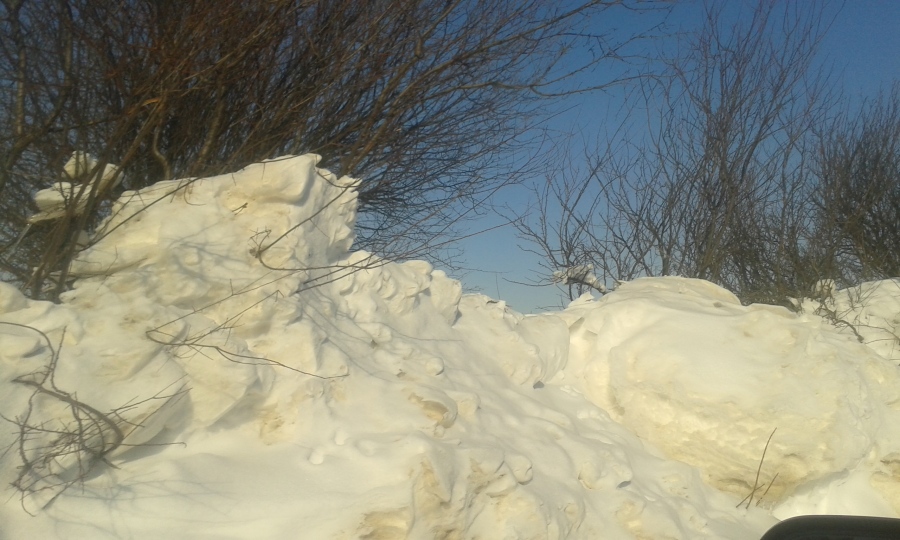 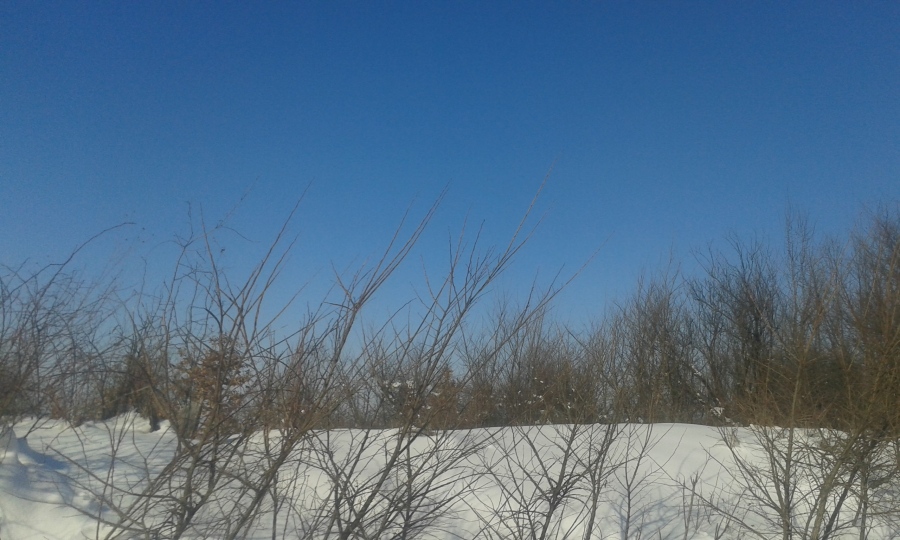 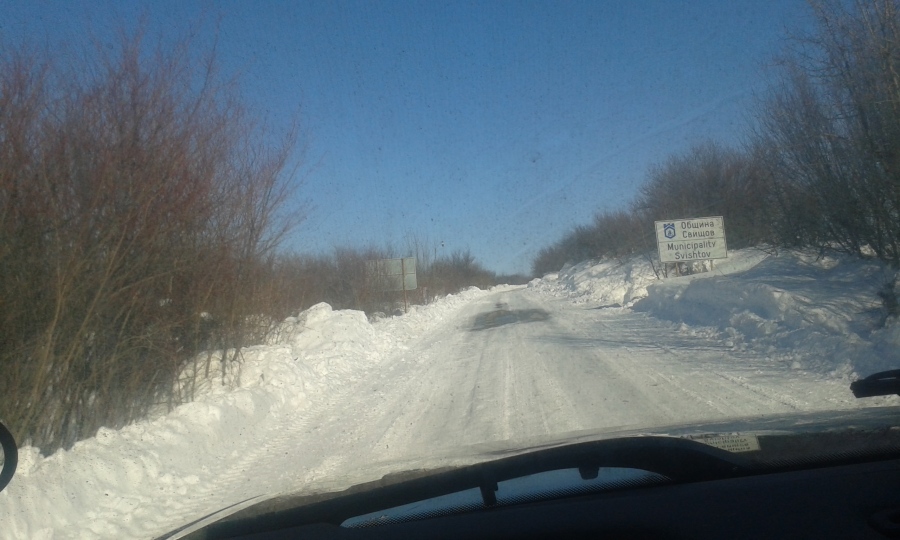 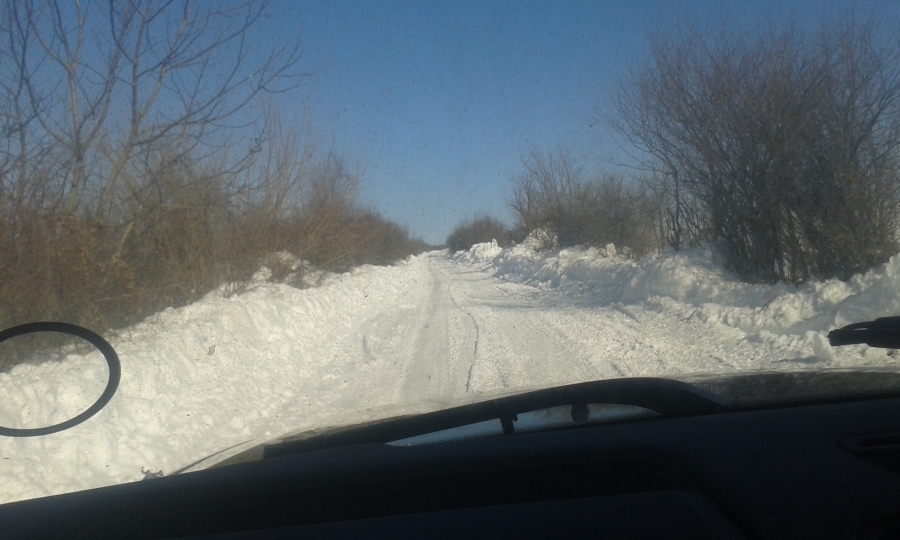 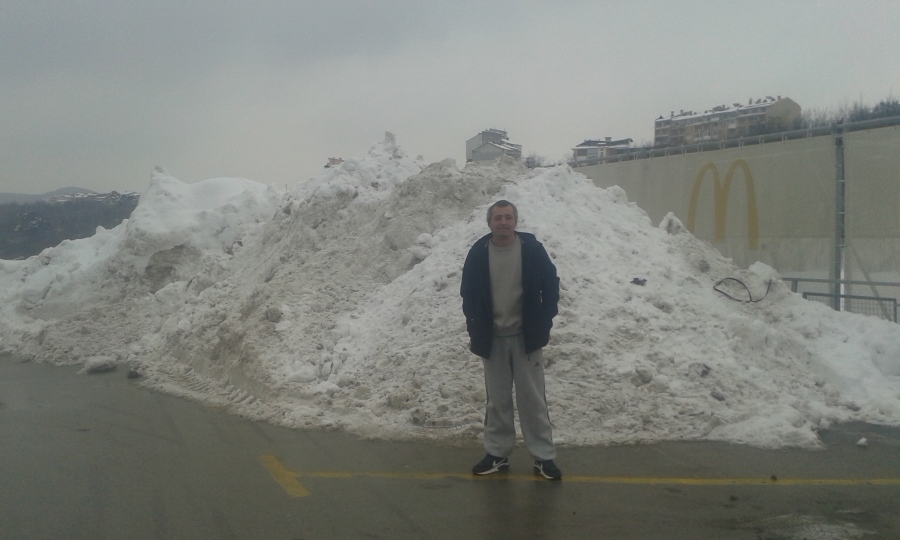 We have finished the bathroom in our suite of rooms in the roof!  No further words here is the finished artefact.  I apologise for the quality of the images.  The phone is on it’s way out 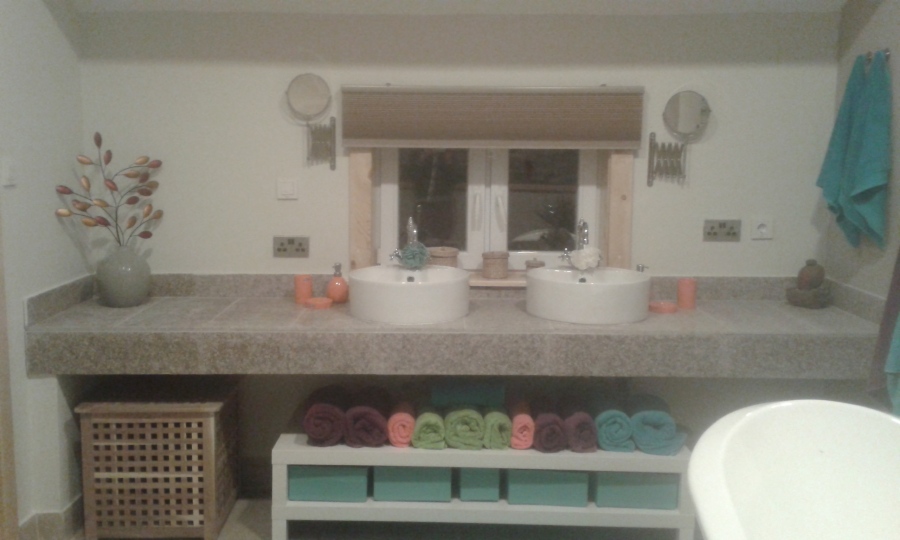 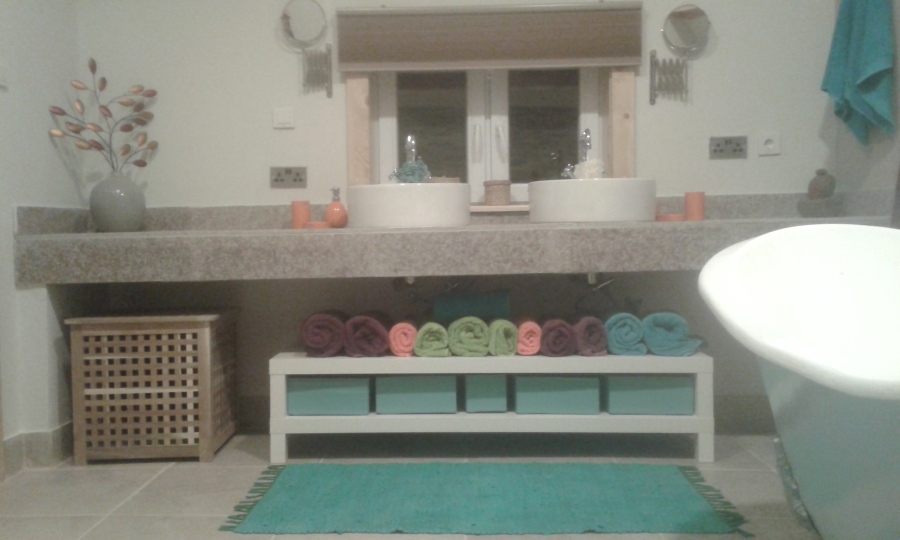 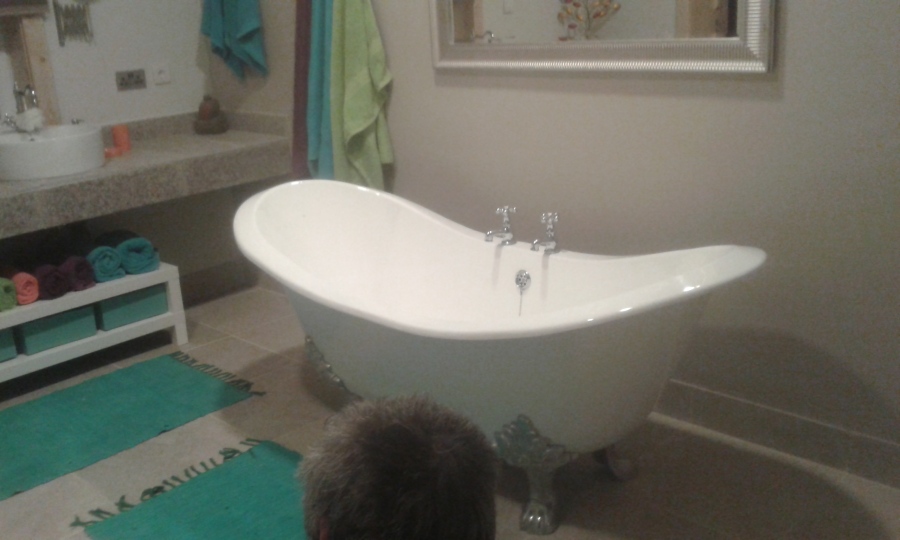 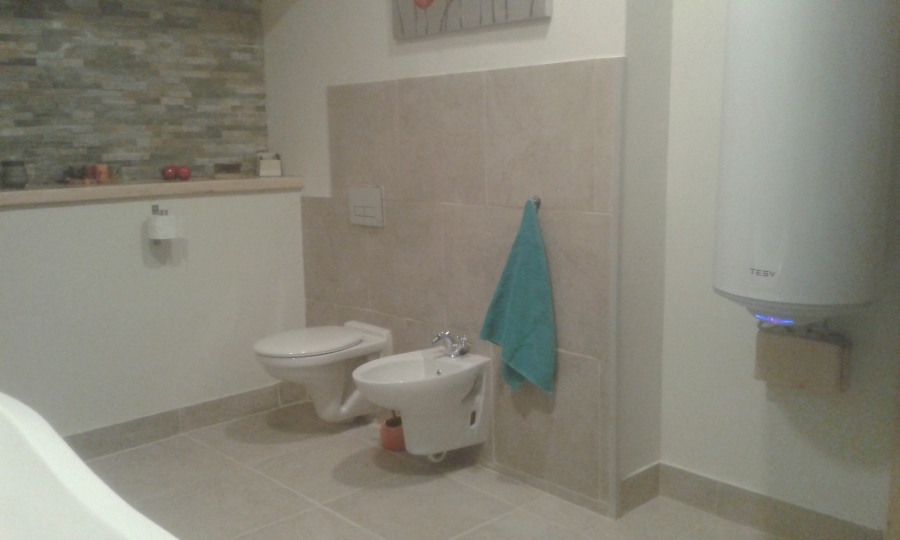 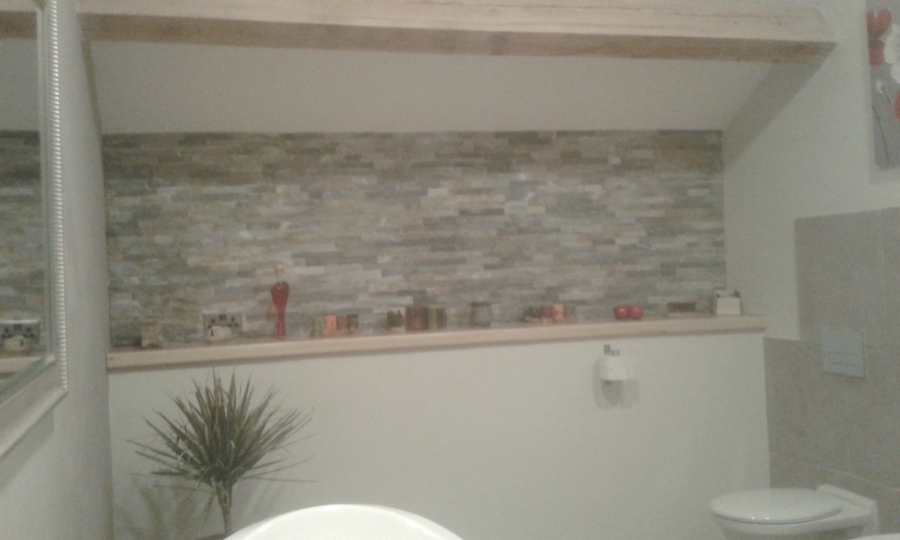 We keep moving things around and adding or taking away but once it is being used full time we will better understand it as a space.  It is as large as our bedroom in the UK and about 5 times as big as our old bathroom.  The whole suite of rooms evolved from being an extraordinarily large open plan bedroom space to the suite of unimaginably sumptuous  rooms because of building requirements.  We couldn’t find steels long enough to span the entire roof space of the barn extension.  So Terry built gables and strengthened the floors with steels.  It evolved beautifully and for the first time we both have a really sequestered  area just for us.  Feeling both humble and grateful.  It’s also a bit of a responsibility for extremely mucky workaholics to keep together.  All the storage is out of this world and I’m reminded of my niece Sophie, asking in amazement of my Mother, “Grandma do you know where everything is in your house”?  She’s needed a pin and my Mom had provided it in seconds.  I’m beginning to feel like I know where everything is – well upstairs anyway.

Bodie is now 7 weeks pregnant.  Well it is 7 weeks since we caught her locked with the village Lothario.  But we can’t be sure it was the first time or the last.  This is going to give our dates a weeks flexibility either before or after 11th February.  After a sicky start Bodie has been an exemplary mother to be.  Terry has constructed a huge birthing pen in the living room.  It is an ugly monstrosity made of OSB and lined with linoleum but we are 100% sure this is where she will go.  It’s been there a week and she’s established residency.  We eject the other animals immediately and they seem to understand that it is Bodie’s space.  Vinnie, who has been castrated, but never the less put sterling effort into impregnating Bodie is the most solicitous pregnancy partner ever.  He actually sits back and lets her cherry pick his food before he will eat.   Ted cleans her.  He takes great joy in cleaning her ears and Bodie enjoys the attention albeit with one eye open.  Her nipples are really quite impressive almost to the point where I wonder if tiny mouths will be able to latch on to them! 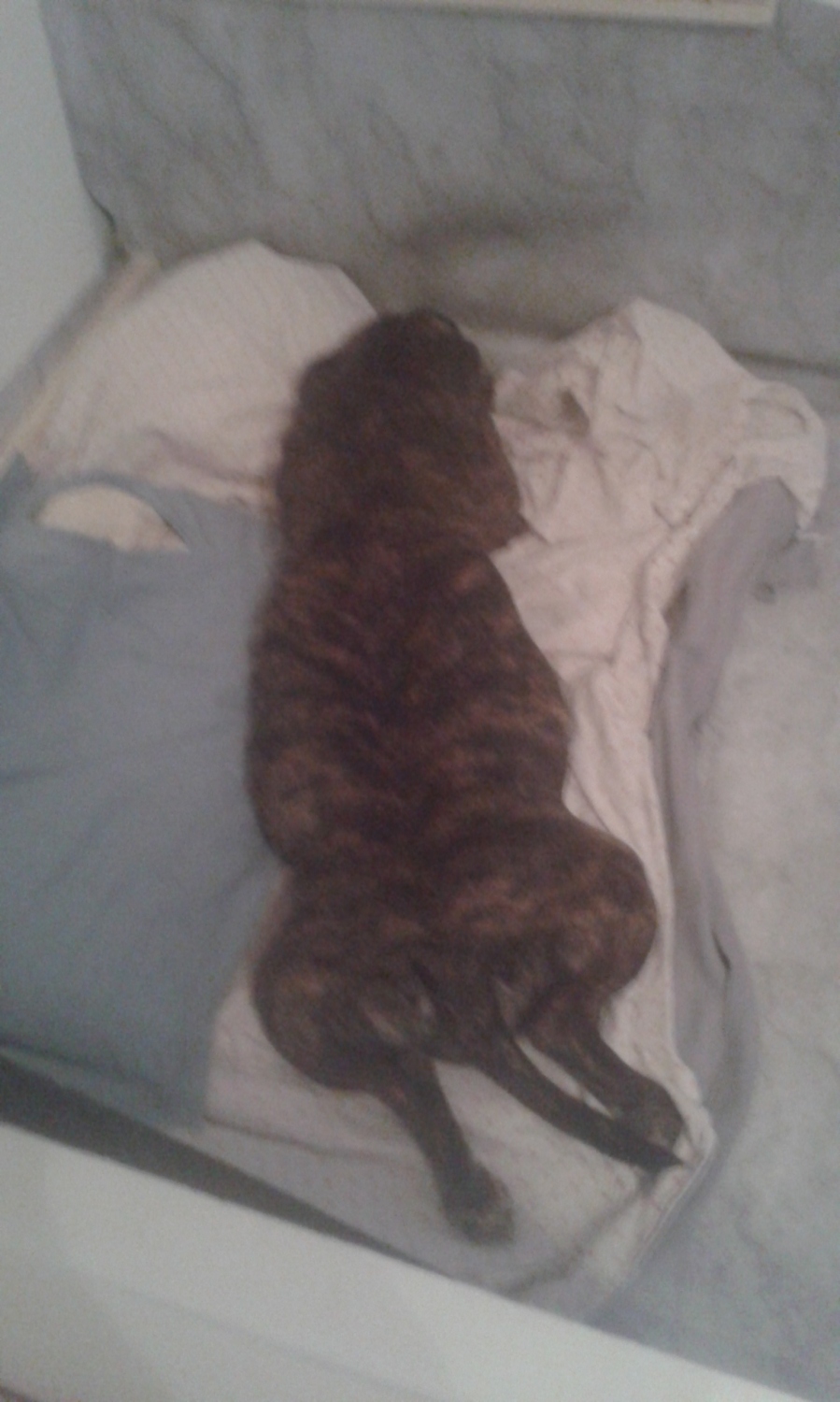 We’d like to take the time to introduce Maud our 6 week old female pig.  She is the same breed as the boys, Balkan Black x Landrace and favours the white and black spotty design.  But unlike her male counterpart she has an adorable ginger stripe down her back.  And to match her titian locks she has a feisty temperament.  We are of course novice “farmers” so the decision to put Maud straight in with the boys was driven by common sense.  Maud had been running around with her litter mates, the big boar and other females.  Our boys were mild mannered enough.  We took a leap of faith and a few precautionary measures and Maud has whipped them into submission.  She takes the prime spot in-between the boys for bed.  She head buts them mercilessly if they take her food and is, all in all, adorable.  And because she will become a breeding sow we have to have a relationship with her.  We can now scratch all their backs and they wait for us, sniffing our legs when we arrive and nibbling our trousers or boots.  They are very characterful. 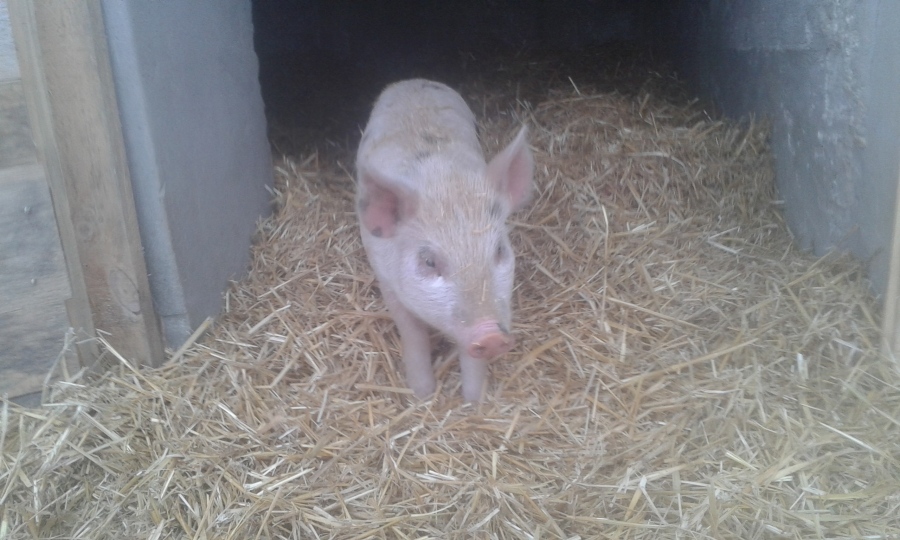 Maud with her ginger highlights! 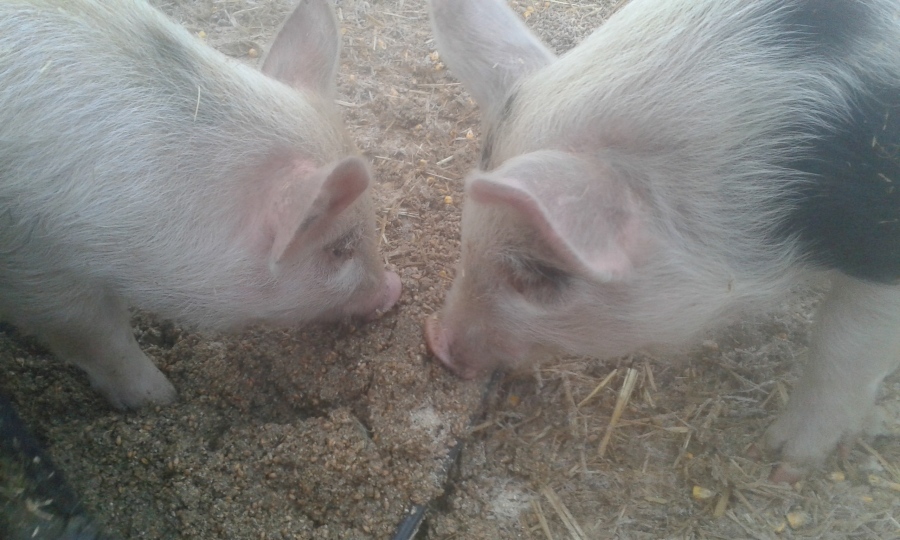 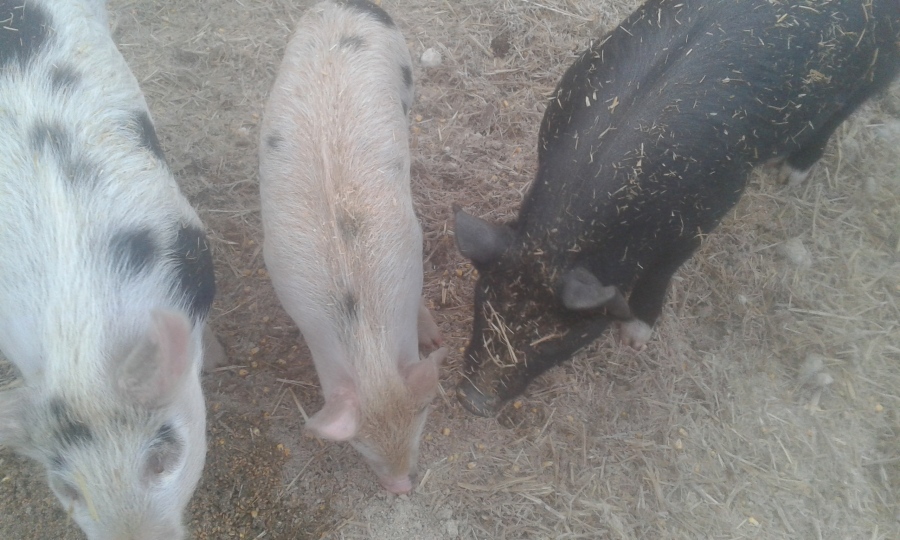 Crabbe, Maud and Goyle – it’s as catchy as the authors names on an academic paper;  very apposite! 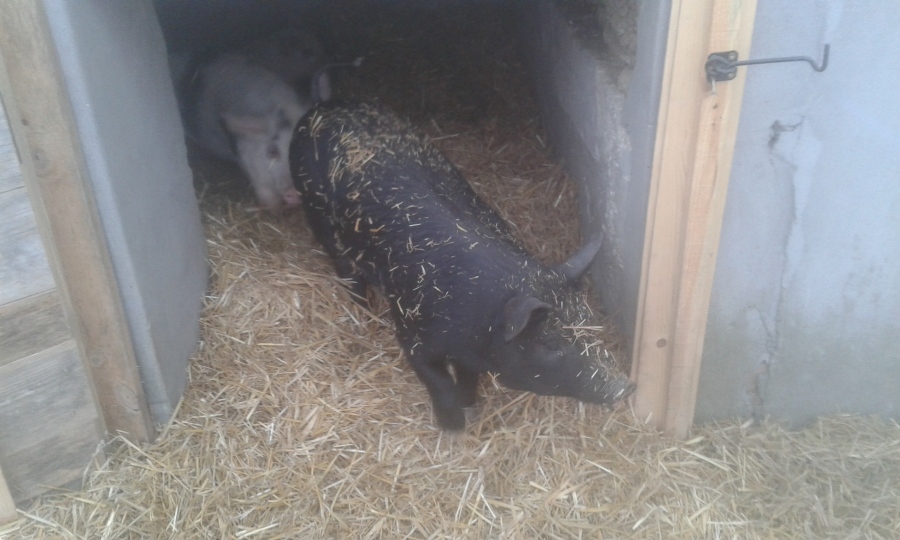 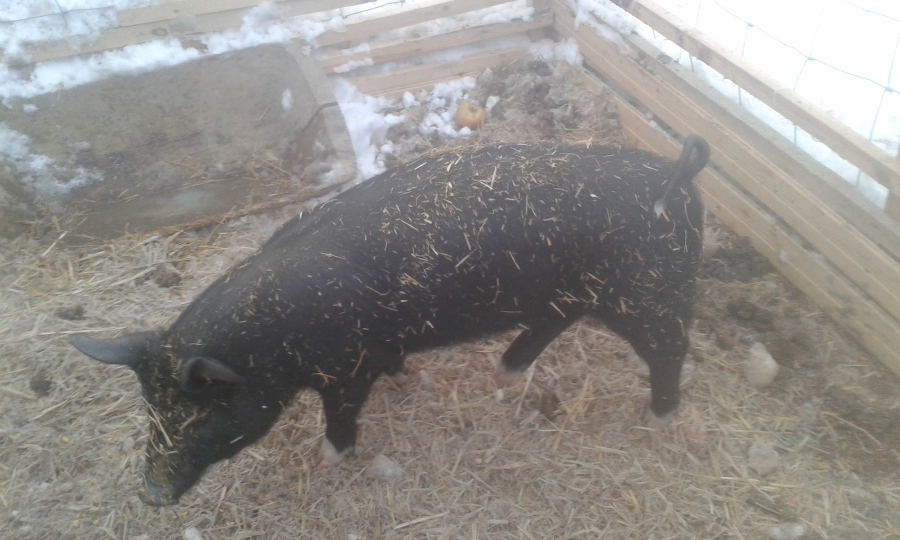 Goyle has short thick hair that attracts every bit of straw.  The Landraces have really long hair and ridiculously long blonde eyelashes.  The straw seems only to get stuck in their eyelashes.

Composting the pigs manure is going to have to be organised.  We don’t want either a smell or insect issues for us and our neighbours.  So once the snow has melted we’ll start by bagging some of it in the plethora of sand sacks we have.  These will be left to cook and compost down for Autumn/Winter use.  Some will be buried down and round the tree bases – again to compost down and some will be added to the general compost.  This pile will need to be in an enclosed container because of vermin and will be ready next year.  Well that’s the plan.  This year is going to be trial and error.

Yesterday Terry opened another bank account closer to home.  We’ve now both got city bank accounts and accounts at a smaller local bank.  It was relatively painless to do but what we thought was interesting is that by being later participants on the technology train the Bulgarian banks have moved immediately to mobile and online banking.  Physical banking is actively discouraged and a paper statement costs 12 leva!  Which is exactly where Barclays was trying to head when we left the UK and alienating  whole swathes of customers used to in house banking and a physical presence.

Our reason for doing this right now is that we are applying for residency next week.  Our goods friends Ian (here 10 years) and his lovely Bulgarian partner Silviq will be accompanying us.  I had already printed off the forms in the Uk and we recently discovered the dossier.  I put out a call on The Pavlikeni Post for information on anyone who had applied recently to the Pleven offices.  And as usual the good burghers of social media cyberspace provided all the answers.  Once we have the statements we will have amalgamated the last of the required documents.  We have been warned that it is going to be a tiresome and frustrating day.  So for anyone that would like to know what a EU resident would require (right now pre Brexit) is as follows

Passport or I.D. card.  The longer the validity of the document the longer the residency offered.   So if your passport runs out next year you may only be offered a 1 year residency permit.

E.H.I.C or equivalent or private healthcare

A current bank statement.  What has to be in there differs from area to area.  Some want to see 400 leva and some 3000 leva deposited.

There is a small fee but it is negligible.  I’ll report back when the process is done.  Once we have residency we can register our vehicles here and stop paying an arm and a leg for insurance, tax and MOT in the UK.  Also a pretty horrendous task by all reports.  But what is 2 wasted days in the bigger plan of things?

Lastly the garden is still white! 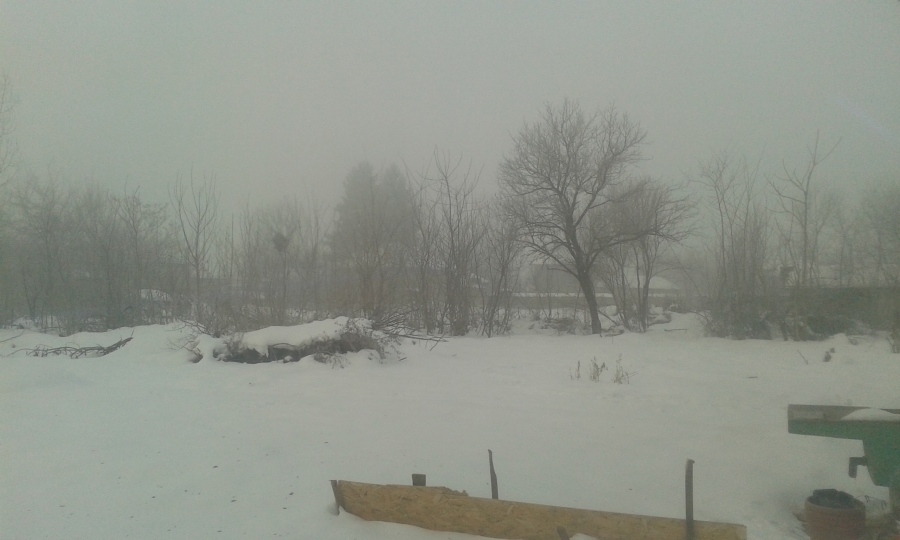 2 thoughts on “The bathroom, pregnancy solicitude, Maud and Residency”